Friday: wrapped up work early, got my badminton game on with the Princess for an hour or so, had another low-ceremony Shabbas dinner. I figure a few weeks of minimal liturgy are OK while we’re waiting for the baby/caring for a newborn; just so long as we don’t make it a habit.

Saturday: took the Lad to first soccer practice of the season. Sat on sidelines under blue skies and puffy white clouds, catching up on email. Yay for cell phones that double as wireless modems. I’m not generally a summer person, but it was one of those days where you just can’t help but start grinning and whistling because it’s just so gosh-darn pleasant. In the afternoon, took the family to York for shopping. Found that Borders had stocked all the graphic novels I failed to find last time I went. Am catching up on the comics I missed as a child. Much like Anime/Maga, am finding that 95% is just as crappy as I always suspected, but there are exceptions. Bought Watchmen.

Saturday night: introduced kids to Real Genius, one of the finest, if not the finest, geek movies ever made. One of the only geek movies I can watch without cringing at the technical buffoonery. Sure, they call dry ice “liquid nitrogen”, but when that’s the biggest gaffe it’s a minor Hollywood miracle. I particularly like the PROM-burning scene aboard the B-1; it brings back memories. Also, Jordan:

Unarguably one of the greatest cinema nerd crushes of all time, and one of the very, very few movie love interests permitted by a studio to be attractive on braininess alone.

Sunday morning: finished Watchmen. Very satisfying. Was impressed with how well it avoided going with superhero tropes all the way to the very end.

Changed oil in both cars. Everything about working with the Subaru is easier than working with the Mazda. It feels like the difference between K-Mart and Sears. The Mazda is all flimsy plastic tabs, awkward reaches, and nonstandard parts. Am thinking of making the next car salesman who tries to sell me a car change the oil in front of me before I make any decisions.

Also, against my better nature, am beginning to believe the stereotypes about women and auto maintenance. Please, female readers, feel free to nip this development in the bud with evidence to the contrary.

No baby yet. Am contemplating possibility he saw his shadow. 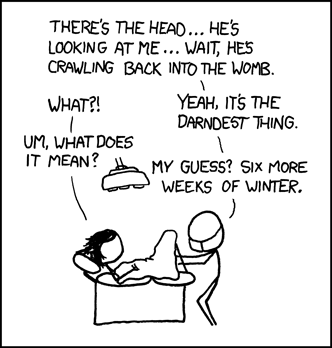 Technically he is not late yet, but we are both more than ready.

Off to Wal-Mart to pick up tie-dye supplies and quesadilla fixin’s.

Hoping tendency to narrate life in style of Rorshache’s journal will wear off in few days.