Same as it’s felt for the last eight years, mostly. I suppose there’s a certain gratification in having passed actual genetic material on to the next generation, and this is the first time I’ve actually cared for an infant; but parenthood is parenthood. Anyone who believed I was going to see the world in a whole new light the moment my son was born was (perhaps unintentionally) making light of the profound changes and adjustments the past eight years of parenting had already wrought.

Isn’t he the most beautiful thing you’ve ever seen

No. Don’t get me wrong, I love him dearly. But all babies are born looking vaguely like John McCain. That’s why God caused pregnancy to give women a temporary case of hormonal beer goggles.

Does he take after you or Stacey?

What part of he looks like a baby don’t you understand? But if I must be more specific, he was born looking like a cross between E.T. and Captain Jean-Luc Picard. These days he looks more like this guy: 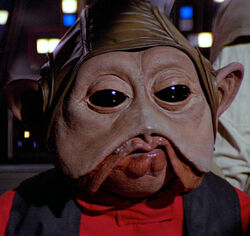 I swear if one more ovary-brained zombie homes in on me while I’m carrying Kashti in a public space I’m going to start carrying a sawed-off in the diaper bag.

Are you getting any sleep?

(Said knowingly, with a wink, as from one parent to another.)